Melissa has provided foster care and respite care to over 70 children, she has 20+ years of experience working with clients with disabilities, and she has 4 children … for now.

“My adoption story is just getting started!” she says. When Melissa first got her foster care license, she did so to be a relative placement for her nieces and nephews. Once her home was empty, she got a call to foster 4 children.  “I hadn’t really considered fostering besides being a relative placement,” she remembers, “but I said yes.”

Melissa was fostering a boy named Justice when she got a placement call for a girl named Justice. She laughed at the thought of having “Girl Justice” and “Boy Justice” in her home, and she accepted.

“I was her 58th placement,” says Girl Justice, proudly. “From the beginning, I knew this was my home. She talked about me like I was her kid. She felt like a mom.”

Boy Justice had 8 placements including two stays at residential facilities by the time he came to Melissa’s home.“I knew I would consider adoption when the time was right,” says Melissa, “and I just knew, as far as fitting into the family, that I wanted to adopt Boy Justice. With Girl Justice, I didn’t know at first. Her family seemed to be doing what they needed to do, but when they no longer could, she was already family to me.”

“I knew from the beginning that I didn’t want to go home,” says Girl Justice, “I wrote a letter to the judge saying I wanted to stay with Melissa.” 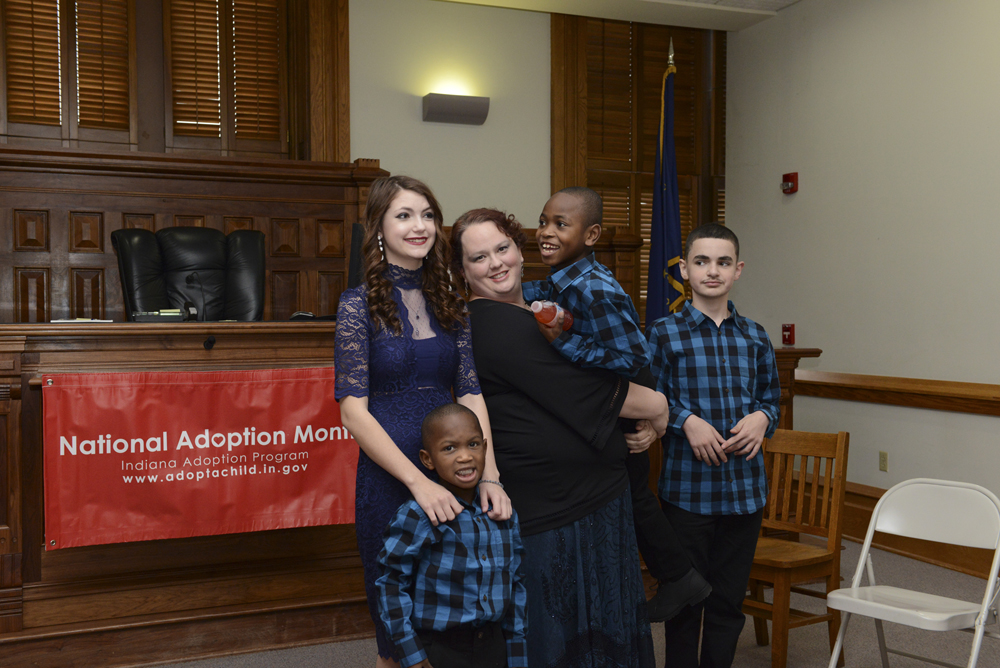 Melissa adopted Boy Justice and Girl Justice on the same day, National Adoption Day 2014. Melissa continued to foster and got a call for a 3 year old and a 5 year old. She agreed to foster them, but when DCS went to remove the children, they could not be found. Sometime later, Melissa got a call for Marzon. She accepted him into her home and slowly realized he was the 5-year-old that she had originally said yes to. She wanted to know where his brother was, and she fought for them to be together.

Mason eventually came to live with her and she remembers both boys crying on Mason’s first night in the home. Despite Marzon’s diagnoses, which make it difficult for him to express or understand emotion in a traditional way, he knew his brother was upset, so he was, too. “Tell me they’re not bonded,” says Melissa, “I’m a stickler about children staying together.”

Marzon and Mason were both adopted on National Adoption Day 2017. “Having other kids in the home helped me out a lot,” says Girl Justice, “Me and Melissa hit it off from the start. Not a lot of people would take in older kids, but she did.” Girl Justice wants families to know how important older youth adoption is. She says, “You should not judge the children by the situation they came from. Older kids get a bad rap because they experienced bad things. A lot of them just need to be understood and helped. Work with them.”

She says there are a few simple key elements to help teens succeed, “It’s a trust thing. Give them time.”

Melissa says the best parts of adoption are, “Everything besides the paperwork, hearing my kids call me ‘Mommy,’ and the fact that they get to be my kids. I treat them as my kids from Day 1, but now it’s official.” Her advice to parents is to always have patience.

Melissa’s family gained another member on November 20th, 2018. Her former foster daughter, Maya, was adopted during a local National Adoption Day celebration. Even though all five of Melissa’s children came to her through very different foster care journeys, they all share one special detail: all five of them were adopted on National Adoption Day.