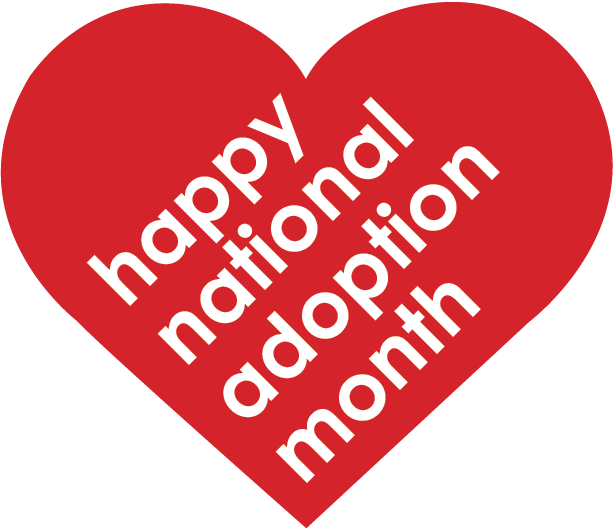 National Adoption Month is celebrated every November, to acknowledge families who have welcomed children into their homes, and to raise awareness of the need for foster and adoptive families. We partner with DCS, CASA, local nonprofits and the courts to plan events and share stories of adopted youth and their families.

Melissa and Brian Cheatham had the opportunity to adopt their son Derrick from foster care in 2015. Although Derrick wasn’t quite a teen when the Cheathams adopted him, that process showed Melissa & Brian that they have a heart for older youth. Can older kids be challenging at times? Sure, but have you ever met a kid of any age who isn’t challenging at times?

A few years after adopting Derrick, the Cheathams began to feel as though their family wasn’t complete. They became interested in Indiana Adoption Program, and after reviewing some child profiles, Melissa says they felt drawn to two young women in particular. After interviewing with Bethany’s team and then meeting her, they say they “just felt like she was our daughter.” 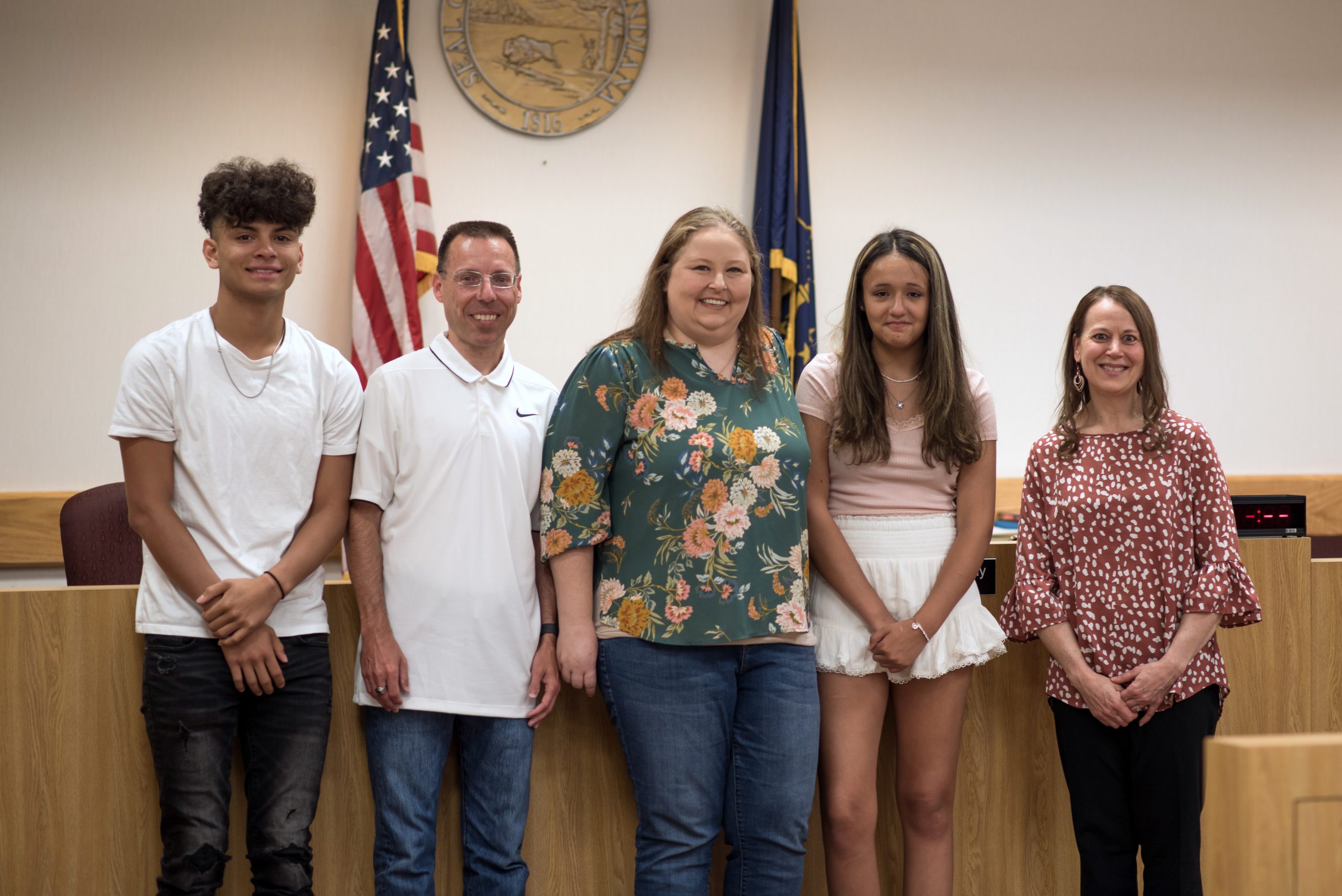 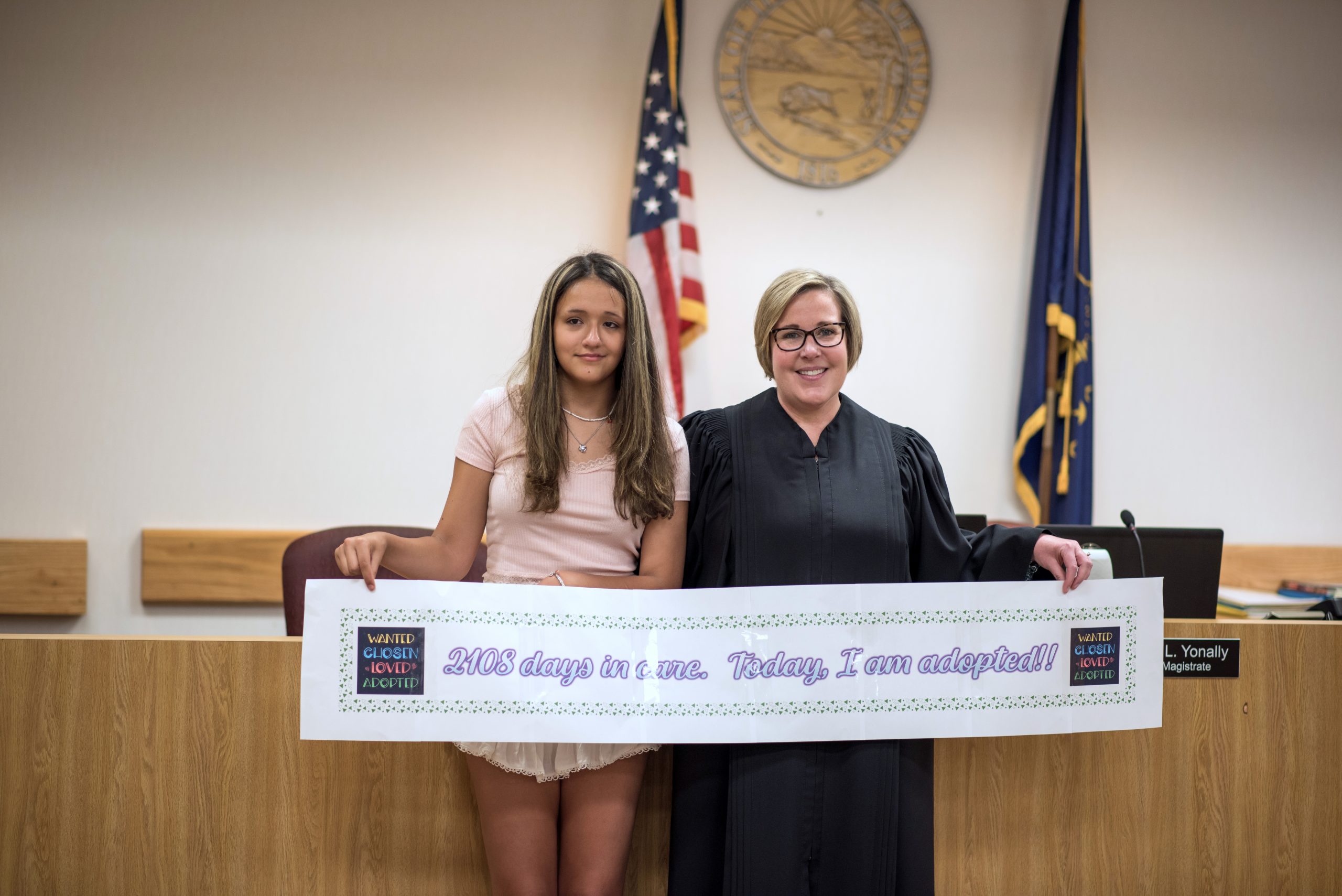 Melissa & Brian are honest: adopting an older child is not a “tiptoe through the tulips” experience where things are easy all the time. These children and teens have been through a lot. They’ve had to grow up faster than children should. They’ve learned to be wary of adults.

But, the Cheathams insist that what makes the hurdles worth it is when you see the children “bloom.” The key is having a support system you can count on. That village we all talk about needing? It’s a real need! And don’t wait until after committing to a child to find your network of support — you’ve got to make sure you have people on your side who are in this for the long haul with you. Sure, you can always add to your supports — in Melissa & Brian’s case, one of their greatest supports was Bethany’s case manager who was “committed to seeing our girl make it to forever.”

If you’re wondering about the other girl that the Cheathams felt drawn to — she’s still in foster care, but she has a good friend in Bethany, and the Cheathams are hoping to be able to call her their daughter too soon. Brian and Melissa are the sort of parents who know that older youth in foster care have been let down enough in their lives, and they need family that can commit through good and bad, ugly and beautiful — and they are hopeful that they can be just that committed forever family to this young woman too.

Andrew was living in Michigan when he first learned about Alex, a teen who was close to aging out of foster care, through a “Wednesday’s Child” segment on WNDU. Andrew wanted to do something for Alex, but knew that the process of adopting from out of state could be lengthy — and Alex didn’t have the luxury of time. So he got in touch with Indiana Adoption Program, and it was decided that Andrew could serve as Alex’s mentor. It wasn’t a pre-adoptive match — but it would give Alex a positive relationship with a supportive, caring adult who could be there as Alex grew into young adulthood. 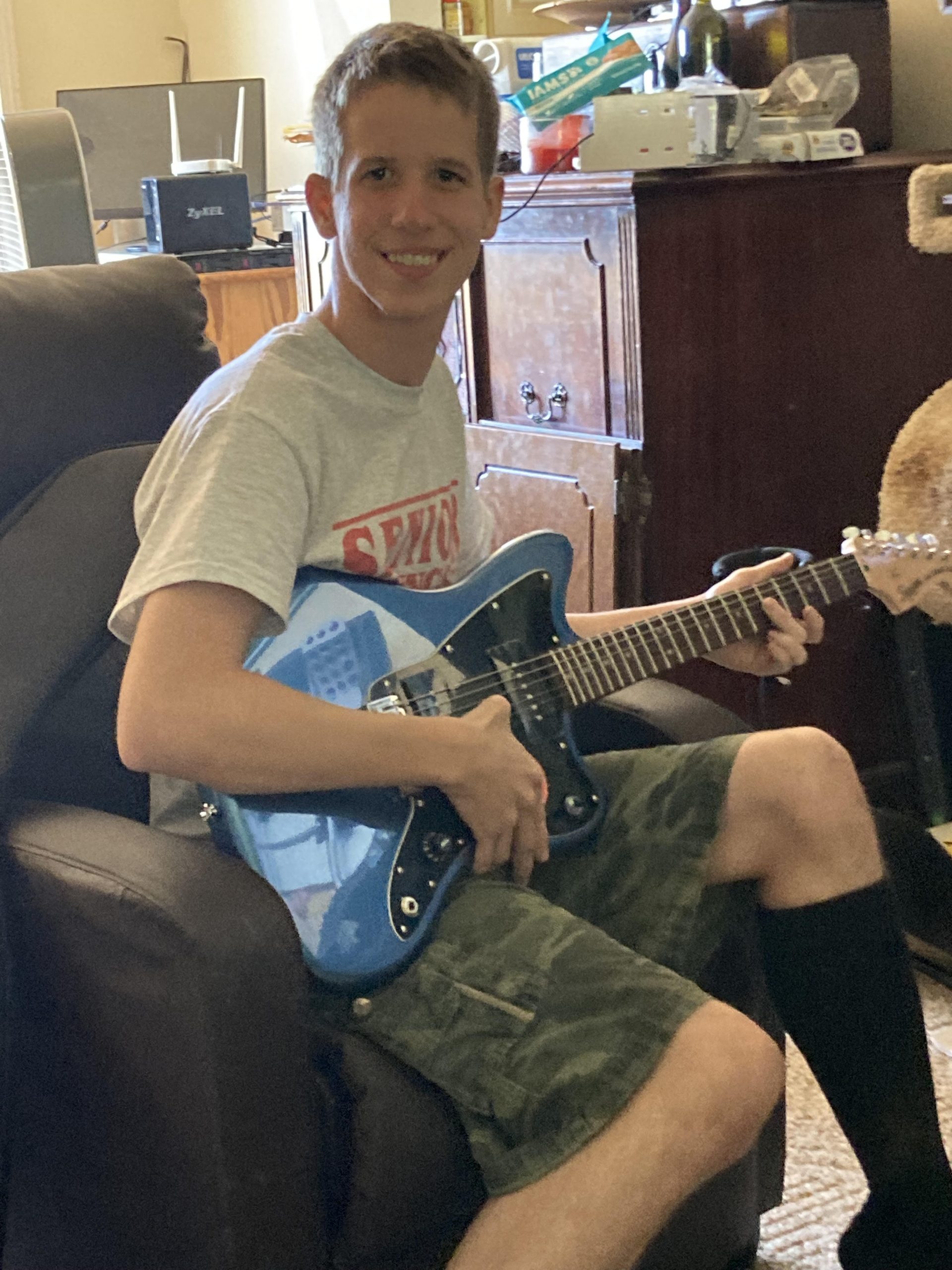 The mentoring started, and it was obvious these two had a lot in common, especially a love of computer programming. Andrew decided that mentoring wasn’t enough – Alex needed a family, and although Andrew hadn’t really seen himself as a father in the past, he just felt like he was meant to be Alex’s dad. So he took a leap of faith and moved back to Indiana to expedite the process of becoming Alex’s father. Seven months after meeting and just three days before Alex’s 18th birthday, a judge made their family official. In the WNDU segment that Andrew saw, Alex told the reporter, “Hopefully, I get adopted this year, because this year is my last. I’m at the 18 mark.” As of January, though, he can say “After 13 years, I’m done. Out of the system!”

We asked Andrew what he might say to families who are considering adopting an older youth. Of course, he had some practical tips: “You have to be willing to look at things through the eyes of the child you are adopting, and to see things as they see things, not necessarily as you do. Remember that no child is without any kind of issue or trauma – keeping this in mind helps you be more accepting. It’s important to be open and communicative with the child’s team during the process.”

But one thing he said really stuck with us: “Be open that you might be changed in the process. In my case, adoption brought out the best in me.”

At only 28, foster and adoptive mom Autumn Crowe knew that her age could add a tricky dynamic to parenting older children. But she felt so strongly about providing a loving, stable home for children in foster care that she decided not to let that deter her. Autumn also had experience as a CASA and a lot of trauma training, and knew she could advocate for any child, regardless of their age or hers.

When Serenity and Jozilynn were placed with Autumn, they did initially struggle with some issues related to the small age gap between them. All three credit their DCS case manager with helping them work through those. He helped Autumn learn to maintain consistent boundaries and an open line of communication, which helped the girls feel more secure and able to trust Autumn and view her as their reliable, loving parent.

Autumn is honest about what she learned through the foster and adoption process: “It’s LONG. I learned that children’s behaviors fluctuate, especially closer to adoption. It’s natural for older children to struggle once after the adoption is final, and as a parent, that’s not always easy. But, I also learned that this process isn’t about me. It’s about the children, and giving them hope & stability.” Serenity and Jozilynn chime in that they think their family is “ready for Round Two – and that the next addition should be a boy!”

They say a picture is worth a thousand words, but what if all you have access to are the words? That’s what Megan and Bill had to go by when deciding to inquire on Marlena and Draven. After interviewing, the family was finally matched with the siblings. Though they’d been foster parents for a few years, going from a family of two to a family of four can be an adjustment! Megan has a lot of trauma-informed training through her work in education, and she knew it was critical to build a network of support. That included their steadfast adoption consultant, but also friends, family, and fellow foster parents. That close-knit group helped get this Disney-loving family through some rough patches, and is also always there to celebrate all the great things too.

Bill and Megan’s best advice to anyone going through a similar time of adjustment? Not surprisingly, Build a network of people who can give you a break when needed, and lend an ear if you need to vent (and you will need to vent!). Read everything you can. Be honest with yourself about what you can handle. (Not everyone can handle everything, and that’s okay!) And be patient. It’ll take some time to find a rhythm as a family. Be patient with the kids, but give yourself some grace too. 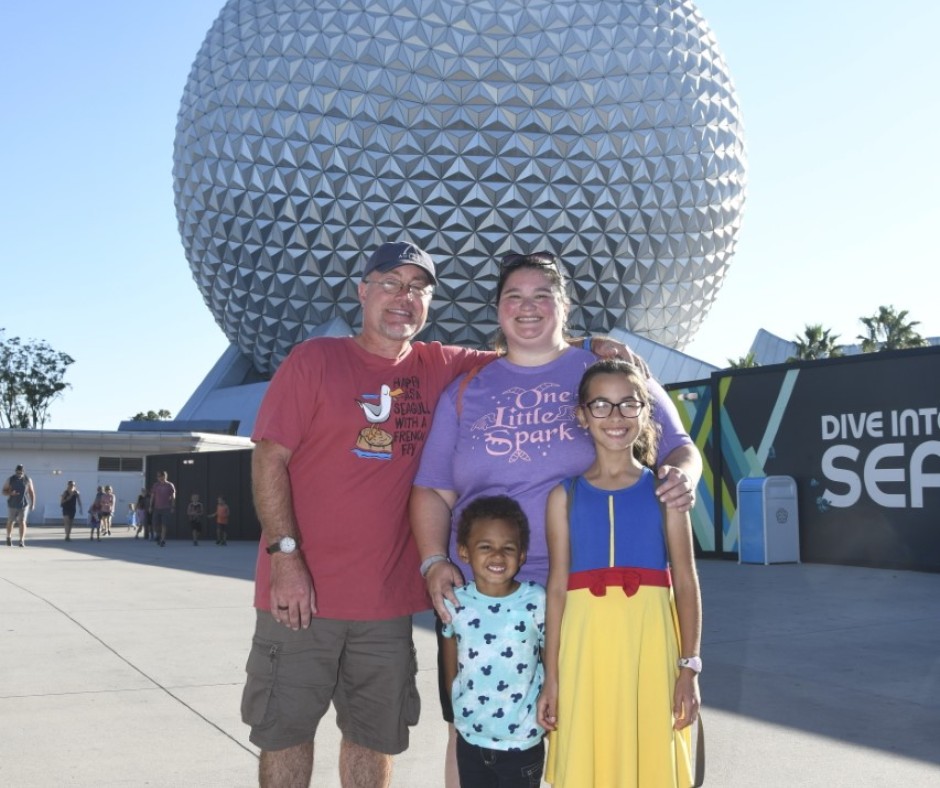 After adopting 13 children with a range of medical challenges, you might think that the Richardsons wouldn’t seek out another. But if you think that, you haven’t met Jaime or Christopher. Their philosophy is more like this: If we have the room, the love, and the medical knowledge to care for a child, why would we say no? It’s just that attitude that led them to Avram.

A charming and happy kid, Avram loves to make people laugh, and enjoys being helpful and learning new things. He also has significant medical needs that require 24-hour care. That alone would be daunting to many parents, but the Richardsons weren’t phased in the least. They have plenty of experience; a strong network of friends, family, and caregivers; and an even stronger commitment to each other and their family.

In February of this year, Jaime and Christopher officially adopted Avram, bringing an end to his 12+ years in foster care and bringing their family’s size to 16…and ushering in a lifetime of new adventures, lots of laughs, and lots of love. 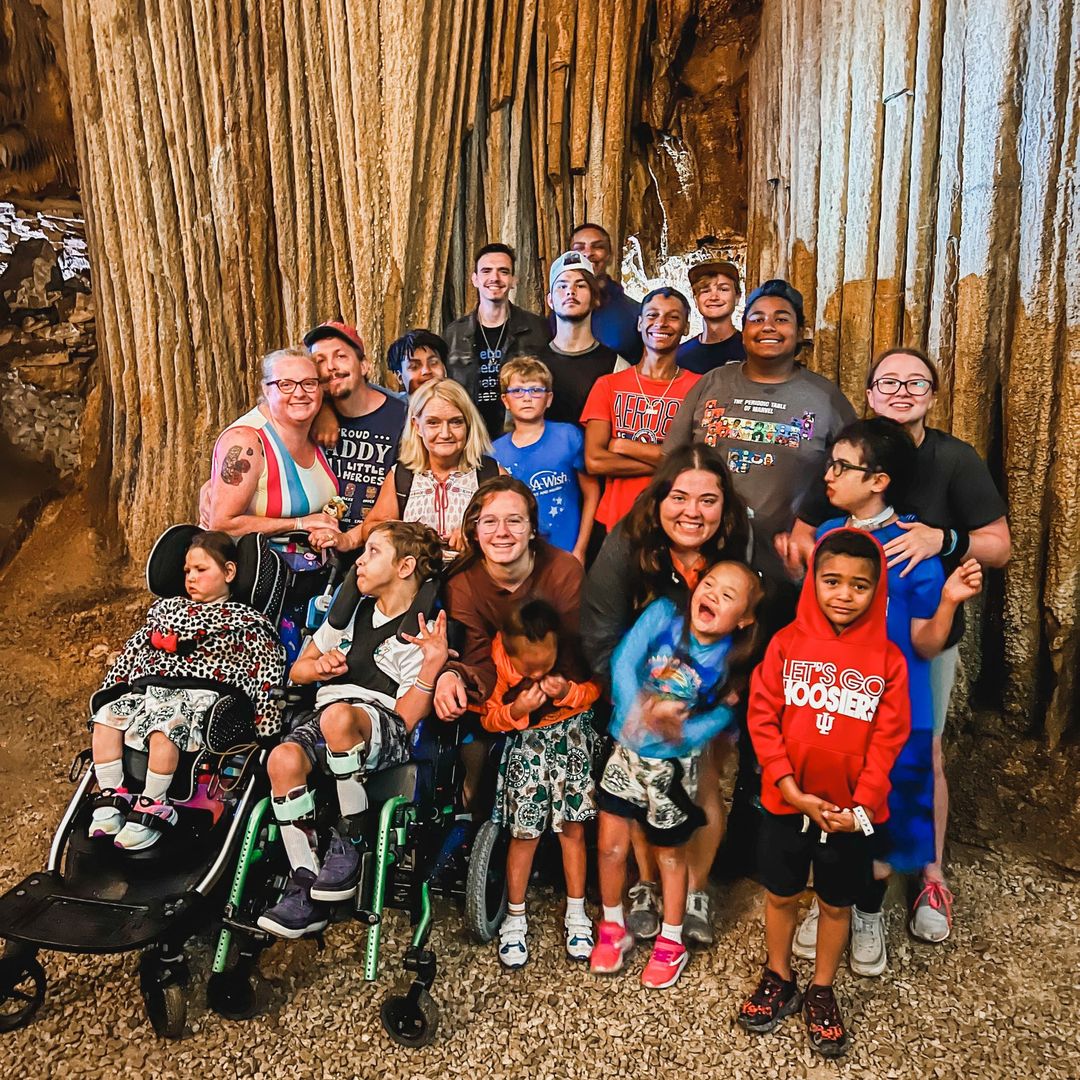 Ever since Eric was a teenager, he knew he wanted to adopt – in fact, he distinctly remembers telling his parents that this was part of his life plan when he was about 13. It was just something he felt that he was meant to do. If you know Eric now, then you know this fits with his compassionate and caring personality. He’s just not complete unless he’s caring for someone who needs it (which is one of the things that makes him such a good firefighter and EMT).

Eric began the process of becoming adoption recommended with Indiana Adoption Program in early 2020. Although somewhat delayed by the pandemic, Eric was not deterred; as soon as he was able, he began inquiring on children who needed adoptive homes. Pretty soon, his heart was drawn to Carter. He interviewed with Carter’s team, and then the two were able to meet. They bonded quickly, never wanting to leave each other’s side. “When I drove him back to his foster family (2 hours away) after his second weekend visit, Carter just sat and cried because he wasn’t coming home with me. That was when I just knew that we were meant to be family.”

Eric officially adopted Carter in August 2022, and they’ve both been getting settled into “normal life” in the months since. Have there been challenges? Of course, but Eric’s motto “Expect the Unexpected” goes a long way to helping him keep things in perspective. Besides, “when you start to see your kid have a relaxed, carefree look, it’s the best feeling you’ll ever have…seeing a child start to blossom after receiving the love and support they deserve.” 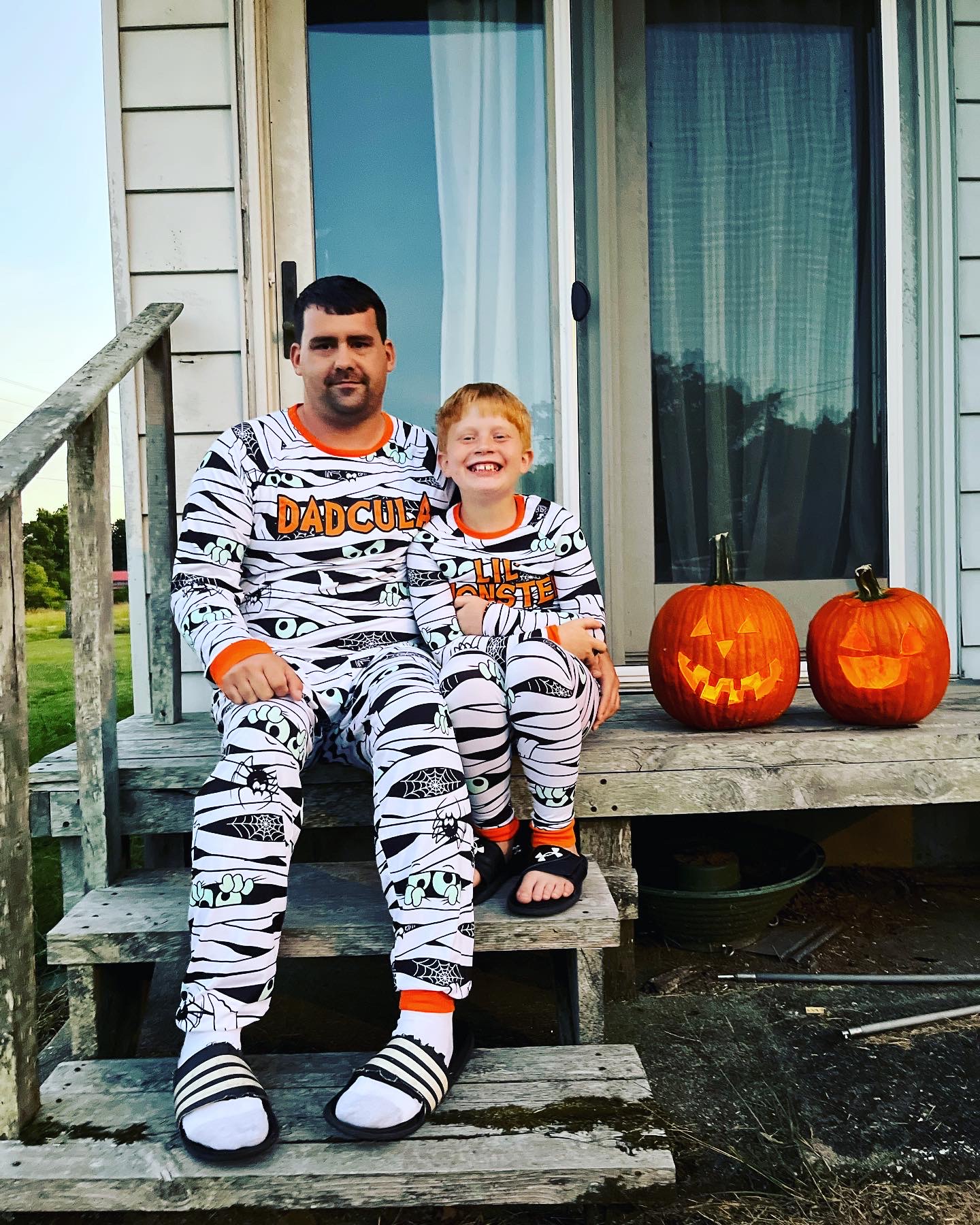 Ask anyone who has adopted from foster care about their child, and you’re sure to hear some great things. If they’re honest, they may share some not so great things, too. Parenting an adopted child can have its ups and downs. The key to making it through these challenging times is not to focus on changing the child. It might be better to change your definition of success and progress.

Brandy and Matt decided to adopt through foster care because of the number of children in the system who need homes. They became foster parents who were supportive of reunification, but were also open to pre-adoptive placements. Now a family of 6, they admit that adopting 4 kids wasn’t in their initial plan. But, they also adamantly insist that their family is “messy, but perfect in our messiness.”

David and Dayna’s adoption journey led them to adopt four younger children from foster care. But once the Atkinsons learned about how many teens in Indiana need forever families, there was no doubt that their journey wasn’t over yet.

Taylor and Nathan met their son at an Indiana Adoption Program meet & greet event. Some of their advice for potential adoptive parents: when it comes to adoption, sometimes you just have to “prepare for, and embrace, the chaos…because it’s worth it!”

As a fifth-grade teacher, Melissa Lafever always kept a close eye on a student named Gina, whose mother had passed away. Melissa knew Gina was being placed into foster care as a result — but what Melissa didn’t know was how much she would be impacted by the news. Melissa and her husband Shawn started the adoption process and welcomed Gina into their family in 2019. This year, the Lafever family also welcomed Gina’s brother Dean into the family too. 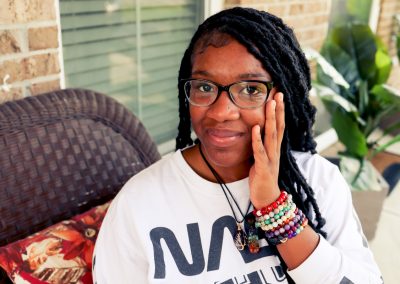 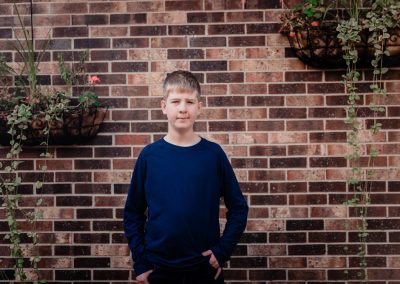 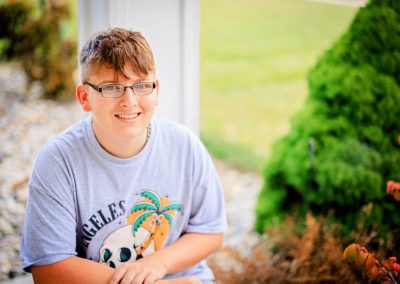