Ask anyone who has adopted a child from foster care about their child, and you’re sure to hear some great things – meeting developmental milestones, a decrease in emotional volatility, an increased sense of trust, improved academic performance. If the adoptive parent is honest, though, they may share some not so great things too – running away from home, suicidal ideation, school suspensions, anxiety.

That’s true of all parents, actually, adoptive or biological – children can be amazing one moment and acting like monsters the next. That’s developmentally appropriate, and doesn’t necessarily reflect “bad parenting.” It reflects stages of development that every child goes through – the ones people call “terrible twos,” “threenager,” “adolescence.” When your child graduates from middle school, high school, college – you as a parent may breathe a sigh of relief, that sigh of “Whew! Didn’t think we were going to make it, but YAY! Here we are!” relief that every parent can relate to. Adoptive parents are no different – it might just be that the milestones look a little different. Perhaps they’re more like, “Whew! We got through another week of school without a suspension!” or “Discharged from therapy = time for celebration!”

Many experienced foster and adoptive parents will tell you that the key to making it through these challenging times is not to focus on changing the child. It might be better to change your definition of success and progress. When you’re raising a child who has experienced trauma, or who has a hard time trusting adults, there’s nothing wrong with having different definitions of success, and celebrating different milestones. Sometimes it’s celebrating all the little milestones that make the difference.

Tiffany and Jim began their journey like many prospective families – hoping to adopt a child through foster care. While they were taking their RAPT classes, they learned about the great need for foster families, and decided to switch their primary focus to fostering. Both agreed that if they had a foster child who became available for adoption, they would consider it – but they were not going into fostering with the primary goal of finding a child to adopt.

The Martins were eager to provide a stable, loving home for kids in need. And they felt prepared – they’d taken the classes, they’d done all the reading, they had a good support system of friends and family. Looking back, Tiffany and Jim are the first to say how naïve they were.  “We thought this will be like, ‘Hey, here’s a kid for you,’ and then we’d continue on with life…just with a kid now.”

For many families, the first placement is the toughest – and that seemed to be the case for Tiffany & Jim. Their first foster children were two girls who hadn’t been taught a lot of things that we take for granted, like why proper hygiene is important, or why the Martins would want to sit at the dinner table for meals. The Martins began to understand that the girls needed a lot of additional attention and guidance, and they slowly adapted their parenting to this. The hardest part, though, was when the girls would see their birth family. Each time the girls would have a visit, all the progress the Martins felt like they were making seemed to go by the wayside.

The case wound its way through the courts, and after a year-and-a-half, the girls were reunified with their birth mom. The heartache was agonizing, especially for Tiffany. “I remember just being in tears, because I knew we were going to have to take a break.” They decided to take several months to rest and rejuvenate before taking another placement. This is one of the things both Tiffany and Jim emphasize – the importance of carving out time for self-care as a foster parent.

Their second foster placement was nothing like their first – which turned out to be a good thing for the Martins. They fostered a child whose only parent was in the hospital and she simply needed someone to look after her child. “It was nice to see the other end of the spectrum,” Tiffany laughs. This placement helped ease the Martins’ anxieties about whether they were “cut out for” foster care, and reminded them of why they had wanted to foster to begin with. And when this child went back to their birth family, Tiffany and Jim felt like it was a celebration. 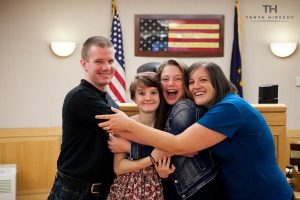 After another short break, Tiffany and Jim were ready to take in a long-term placement. But this time, they wanted to do things a bit differently. Instead of accepting an emergency placement, Tiffany and Jim patiently gathered information and did some research, keeping their case manager involved about their thought process. Their case manager told them about 13-year-old Emily, who was living at a residential facility, and was ready to transition to a foster placement. The Martins were able to talk with their case manager and the team at the residential facility about the challenges that Emily faced, and learn more about her situation.

Tiffany and Jim remember Emily being very shy when they first met her, as expected. But as time went on, Emily slowly began to open up, and the Martins grew to love her tremendously. However, as Emily started getting more comfortable with the Martins, she began to test boundaries and behave in ways that Tiffany and Jim hadn’t seen from her before. This was the end of the “honeymoon period,” which nearly all foster and adoptive parents experience. The Martins knew that Emily’s arguing, yelling, and defiance were fueled by her past experiences, but even knowing that didn’t make it easy for them to manage. Tiffany says they kept reminding themselves, “We loved her, but we had to realize that love is not going to fix all the issues these kids have. You have to decide if you’re capable of doing what it takes.” Having these tough conversations as a couple was critical to them being able to maintain a united front in the midst of Emily’s anger.

While raising Emily, the Martins learned that “as long as you’re willing to invest in therapy and you put into practice what they’re teaching you, it can change behaviors.” At first it was hard for Tiffany and Jim to get Emily to invest. But after much trial and error, they found out that she was motivated by rewards. “Treats were the only thing that got Emily to open up and have a real session in therapy,” Tiffany explains. The Martins used this as incentive to encourage Emily’s personal growth. “When Emily was able to have good session (and good not meaning like everything was peachy), but as long as she was investing, we always went and got a treat afterwards.” Sometimes it was biscuits and gravy, other times a Slushee – but the Martins made a consistent habit of rewarding Emily’s investment in her own therapy, and to remind her that they would celebrate this investment as a success! 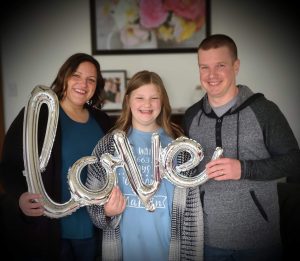 Emily is now 18 and although she’s made significant progress from where she was at 13, she still struggles to manage her anger. Because her past trauma still negatively impacts her behavior, the Martins have had to work with residential facilities and probation officers to keep Emily safe. And although Emily still faces adversity, Tiffany and Jim know that they have worked hard to make her life better, and they will continue investing in Emily and her successes. Even with the hurdles they’ve faced, the Martins are emphatic: “Even knowing what we know now, we would do it again!”

And they actually did: Tiffany and Jim continued fostering, and this past May, they adopted 12-year-old Vivian into their family. Tiffany continues to advocate for adoption as an Adoption Champion with Indiana Adoption Program, and has a special spot in her heart for families who want to adopt preteens and teens. She knows how hard it can be, and how rewarding.