Like many initiatives, National Adoption Month started out small: it began as just one week, in just one state, over 40 years ago. In 1976, Massachusetts’ then-Governor Michael Dukakis announced Adoption Week to help bring awareness to the need for adoptive families for children in foster care. About 8 years later, in 1984, after many of the other 49 states had created their own adoption weeks, President Ronald Reagan announced National Adoption Week. 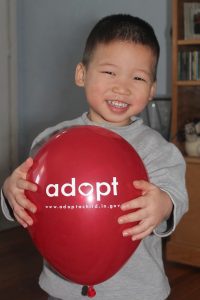 By 1995, there were so many awareness events around the country that it became clear that a week just wasn’t enough! President Bill Clinton expanded National Adoption Week to the entire month of November, creating National Adoption Month. And now, thanks to a joint initiative by the Dave Thomas Foundation for Adoption, Congressional Coalition on Adoption Institute, Alliance for Children’s Rights and Children’s Action Network, the Saturday before Thanksgiving has become known as National Adoption Day. Many judges hold special adoption events the week before National Adoption Day, and communities, businesses, and nonprofits come together on that Saturday to honor adoptees and their families.

In addition to National Adoption Day, the entire month is assigned a different adoption-focused theme each year. In recent years, the themes have been “We Never Outgrow the Need for Family” (2015), “Teens Need Families, No Matter What” (2017) and “In Their Own Words” (2018). Although we celebrate all adoptions during November, the theme this year – “Youth Voices: Why Family Matters” – draws the focus to the importance of providing families to teens who are at risk of aging out without a permanent family. There are over 120,000 children and youth in the United States who need adoptive homes – and at least 5% of them are teens, which doesn’t sound like a lot…until you realize that’s at least 6,000 kids. That’s a lot of older youth who need the stability of a permanent family! Teens are less likely to be adopted than other children, but family still matters to them – and many will say they want to be adopted, and want a place to call home, even as they are transitioning to adulthood.

And, that concludes our history lesson on National Adoption Month. We’re looking forward to a time when we can say that there’s no longer a need for National Adoption Day, Week, or Month – because all children and youth have loving, permanent, stable homes! Let’s work together to make that happen.