Ever since she was a teenager, Dayna had the desire to adopt.  After marrying her husband David, they decided to turn that dream into a reality. At first David was hesitant about adopting from foster care, but after becoming friends with foster parents at their church, he started warming up to the idea. And once David met some of their friends’ foster children, he was confident and comfortable in their decision to move forward with becoming foster parents and potentially adopting a foster child. After all, as David realized, children in foster care are just children who need families to love them!

David and Dayna admit that they started their foster and adoption journey like many prospective adoptive parents do – by running before they were ready to walk. They learned of a waiting sibling group in Michigan and began the licensing process in hopes of becoming these children’s parents. Since the Atkinsons weren’t licensed when they inquired about the children in Michigan, the process felt interminable – there were background checks, training sessions, and home studies still to be done before they could even be considered as adoptive parents for these or any other children.

The process of becoming licensed opened their eyes to the intricacies of the child welfare system, and just what adopting from foster care might entail. “I always tell people that the first year of fostering is the hardest,” says Dayna, “because you just don’t understand how things work.” Once they were licensed, David and Dayna decided to accept a placement through the Indiana foster care system. One of their early placements was for Zy and Ellie, two children who were in need of a short-term placement. “2 weeks at most,” they recall being told.

But, as often happens in foster care, that timeframe changed – weeks became months became years, and then the children’s plan changed to adoption. The Atkinsons had been fostering Zy and Ellie for two years – the kids were already considered part of the family. The children became “official Atkinsons” in 2018, and although David and Dayna’s family doubled in size, their adoption journey was far from over. They continued to foster, and soon they found themselves fostering and then adopting a sweet little girl named Lila. 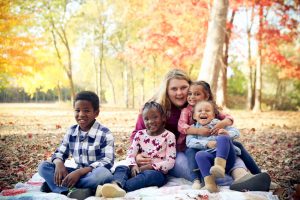 Now David and Dayna were outnumbered 3-2 – so you might think that they’d be content as a family of 5. Life takes funny turns, though. Although they weren’t anticipating adopting again, that changed after David and Dayna read about older youth in foster care who wanted to be adopted. Up to this point, Dayna and David had only fostered and adopted younger children, but now they specifically wanted to learn about adopting a teen. When they reached out to their agency about adopting a waiting teenager, the Atkinsons were told there would probably be a long wait because “there were a ton of younger kids and babies” who needed homes at that time. So Dayna did some additional research and learned about Indiana Adoption Program, and then asked their agency to help them become recommended to adopt.

After becoming recommended to adopt through Indiana Adoption Program, the Atkinsons read a lot of child summaries for teens who were waiting for a forever family. You can learn a lot from a child summary – but it can also be a little overwhelming. Fortunately, as a recommended family, David and Dayna were able to meet some of the kids they had read about by attending a Meet & Greet event. Attending a Meet & Greet was a critical turning point for the Atkinsons, because interacting with the children helped Dayna and David understand that the child summary is just one piece of information. “One of the things that impacted me was when a staff member said, ‘Remember when you read these child summaries it’s the worst thing, or the worst day, or the worst event of these kids’ lives…and no one wants to be seen as just the sum of their worst experiences.’” From that point on, how Dayna and David read child summaries changed. Instead of being overwhelmed by multiple pages that documented the child’s worst days, the Atkinsons took a solution-oriented approach. They began asking what specifically these waiting youth would need to succeed and thrive in an adoptive family. It was as if each teen went from being just words on a page to being a real child. 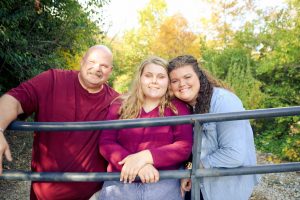 At the end of each adoption Meet & Greet, all attendees are asked to complete a survey. One of the questions on the child survey asks if there were any families in particular that the child enjoyed meeting. After one event, a teenager named Kailey noted how much she liked Dayna and David. The Atkinsons had attended that event being interested in a completely different child – but they had spent some time with Kailey at lunch. Making small talk during lunch at a Meet & Greet can be more than a little uncomfortable – for parents and teens! “Some parents don’t open up or are shy at these events, but you have to be okay with making awkward conversations if you are going to find someone who fits with your home.” Dayna continues, “I think being a nurse helped, because I’m use to making awkward conversation while still being sensitive to trauma. It’s really a balancing act.” Dayna’s experience allowed her to ask Kailey questions that gave the Atkinsons insight into what Kailey wanted in a family, while still being sensitive to how much she may want to share.

Kailey admits that the Meet & Greet was a little nerve-wracking at first. “I was nervous, not because of the event; but the situation of me needing to find an adoptive family was what made me nervous.” She had been in foster care for some time, and was more than ready to find her forever family. Many waiting children are eager to say goodbye to foster care and hello to a permanent family – but are also anxious about moving to a new home, especially one that has the potential to be a forever home. Kailey, however, wasn’t worried at all. She’d already met the Atkinsons at the Meet & Greet, and then did a few overnight stays with the family, so Kailey felt like she knew them and was excited to get moving (literally!). It didn’t take her long to feel as though she was finally home. 15 months later, in June 2020, the Atkinsons finalized Kailey’s adoption. Although this was their fourth adoption, it may have been the most emotional – it certainly was an emotional day for Kailey, who had been anticipating the big event in her head for years! 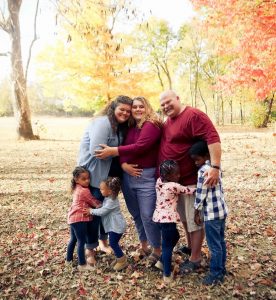 So after four adoptions in two years (and no plans to stop fostering or adopting!), what advice do the Atkinsons have for prospective families? “Take the training seriously” is a big one; not just the initial classes, but the ongoing learning sessions and services too. Learning about trauma-informed care, brain mapping, and different types of therapy have been key to helping the Atkinson children understand their past traumas, so that they can heal and thrive. Also, Dayna raves about the post-adoption services they have received. “It’s really invaluable. They’ve connected us with tons of great resources and conferences that we would have never known about without their help.”

Kailey chimes in with her advice to waiting teens in Indiana Adoption Program: to kids (like Kailey) who may not want to go to a Meet & Greet, she laughs and says, “Suck it up and go!” She’s a self-described homebody and had to travel two hours to get to the event – but looking back, it was so worth it!