Just a Different Kind of Rollercoaster

When Jacqueline and Jake Cline first considered adopting, they explored all the options – international, private, independent, and public. After a lot of research, they decided on private adoption for their first child. It was not an easy decision, or an inexpensive one. At the time, the cost was nearly $40,000 and the average wait time was 6 months. In the meantime they had to be ready, because it could be any day. Talk about an instant family!

It was only 3 months before they received a call saying that a baby boy was born the night prior and they were being considered by the birth mother. (Spoiler: it was their future son, Hudson.) Jake and Jacqueline describe the next few days as a “whirlwind” and an “emotional rollercoaster.” Although Hudson’s birth mother had decided she wanted to put her son up for adoption, in private adoptions, that decision isn’t final until the biological parents willingly sign their parental rights to the adoptive family. That means birth parents can change their minds – and in Hudson’s case, his biological mother’s certainty was wavering. 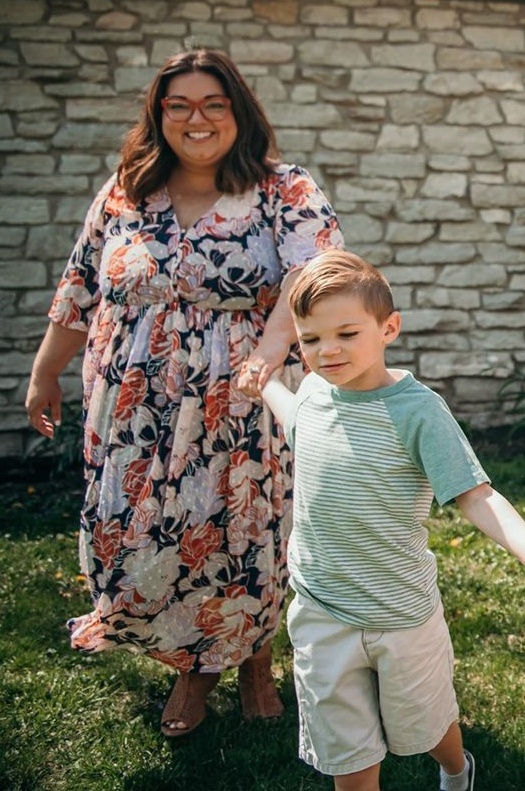 “His birth mom went back and forth until the morning she gave birth. We didn’t know until about an hour before,” explained Jacqueline. Not surprisingly, Jake and Jacqueline were anxious: “We were really nervous, waiting to see if she would choose us, almost to the point of being physically ill.” From a birth mother’s point of view, the wavering is understandable – choosing a family to raise your child is a lot of pressure! Especially if you’re not certain that adoption is the right decision to begin with. “The night before we went to pick him up, it was a no! The birth mom wanted to keep the baby.”

So the Clines waited. Hudson’s biological mother sorted through her options and ultimately chose adoption – and Jake and Jacqueline. The Clines learned patience, and also the importance of having a support network to lean on in times of uncertainty.  We know how this part of the story ends: several months later, in November 2014, they finalized Hudson’s adoption.

Fast-forward 5 years, and the Clines, Party of Three, are doing great. Hudson’s 4 years old, and Jacqueline and Jake decide that they’re ready to add to their family again. Only this time, they weren’t interested in doing the “midnight feedings and diapers” stage. (“We enjoy our sleep,” they both laughed.) After learning about the need for foster and adoptive parents, especially for children over the age of 8, they decided to become licensed, with the intention of eventually adopting an older child. Even though they wanted to adopt, fostering made sense to them: they didn’t have a desire to be an “instant family” again, and by fostering, they could provide a safe and loving home to multiple children who needed that – while also learning more about how their family dynamic might need to change to accommodate an older child with a trauma history. 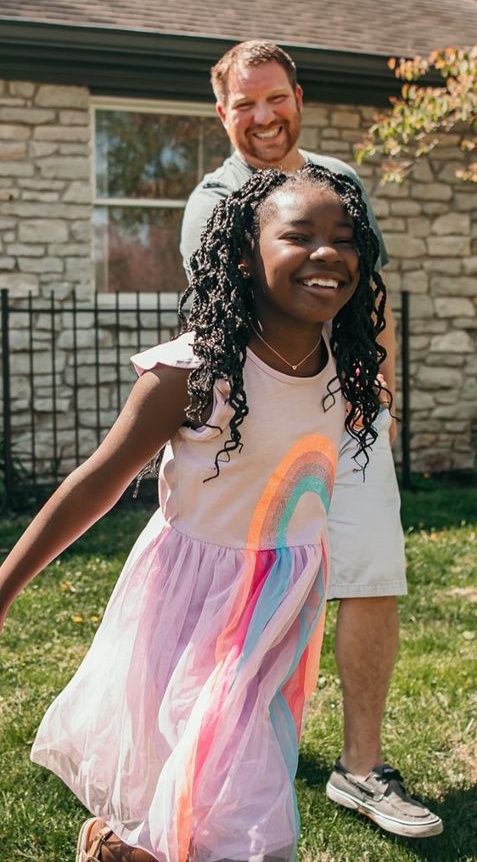 With just a few placements, Jake and Jacqueline learned a lot about trauma and the type of needs that foster children have. It was hard to say goodbye to some of their fosters, but the Clines knew they’d made a difference for those children and their families, even briefly. By May 2019, the Clines were ready to focus on adoption. They turned to their Adoption Consultant, Beth, who guided them through the Adoption Recommendation process. Adoption Recommended families have access to a secure parent portal where they can learn even more about the children who need forever homes. It was not long before a young girl named Renesmee caught Jacqueline’s eye. “Her smile was like sunshine!” Jacqueline was so excited that she just had to tell Jake. But imagine her surprise when, before even talking to him, Jake told her that he’d been drawn to Renesmee’s profile too!

They submitted an adoption inquiry, and about a week or two later, the Clines were offered an interview. After their interview, Jacqueline was convinced that the team was not going to select them. Renesmee’s team, however, was confident that the Clines were the right family for Renesmee. The transition process for Renesmee – who goes by the nickname “Nezzy” – was slower than Hudson’s; after all, they couldn’t simply bring her home from the hospital like they did with him. Transitions are an important stage in a child’s and a family’s adoption journey. The plan was for Nezzy to meet the Clines first, spend some time getting to know them, and then transition to overnight visits. The problem? It was now 2020 and everyone was in full quarantine-lockdown mode. A lot of the places they might meet for initial visits were closed, so the transition plan had to change a bit. They did a few meetings and then began overnight visits. 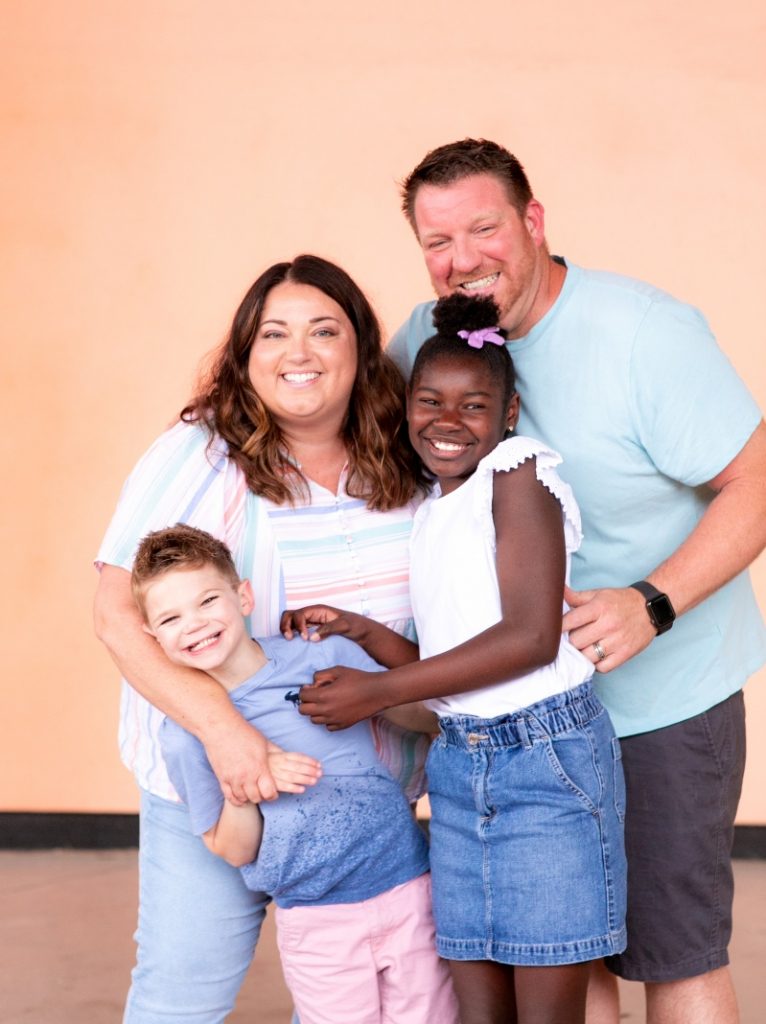 In August 2020, Nezzy had fully moved in with the Clines. The transition from meeting to living with them was quick, but these were unprecedented times – and the team felt that it was important that Renesmee be settled before the start of the school year. The Spring shift to e-learning had made school especially difficult for Nezzy, and she needed some additional support. Jake and Jacqueline were no strangers to educational advocacy, though – Hudson has special needs of his own that required the Clines to work with the schools to ensure his academic success. It didn’t take long before Renesmee caught up on her classes and felt settled into the Cline family.

On April 26, 2021, Renesmee – the girl with the sunshine smile – was officially adopted by Jacqueline and Jake. Adoption day was “perfect” and since the costs involved with adopting from foster care are significantly lower than private adoption, the Clines had money to hire a professional photographer, rent yard signs, and make the day extra-special. Still, they admit that just like with Hudson, this process was an emotional one from start to finish. And also just like with Hudson, it was a rollercoaster – though a different kind. “You have to experience trauma – that was the biggest difference. Our son had trauma too and he may have more special needs. However, with Nezzy being in foster care for 2,412 days, she has a lot of different needs and unknowns.” The Clines knew all of Hudson’s history and were able to create a journal of his birth story to give him. But with Nezzy, her history had a lot of information gaps so they couldn’t tell her story with as much detail. And there were things they didn’t even think of, like how Nezzy might react to there being photos of Hudson as a young child…but none of her. “We took down some of our baby photos of Hudson, because we don’t have the same for Nezzy. But we are commissioning a portrait of Nezzy based on what we think she looked like as a baby.” They plan to give it to her on her upcoming 10th birthday. 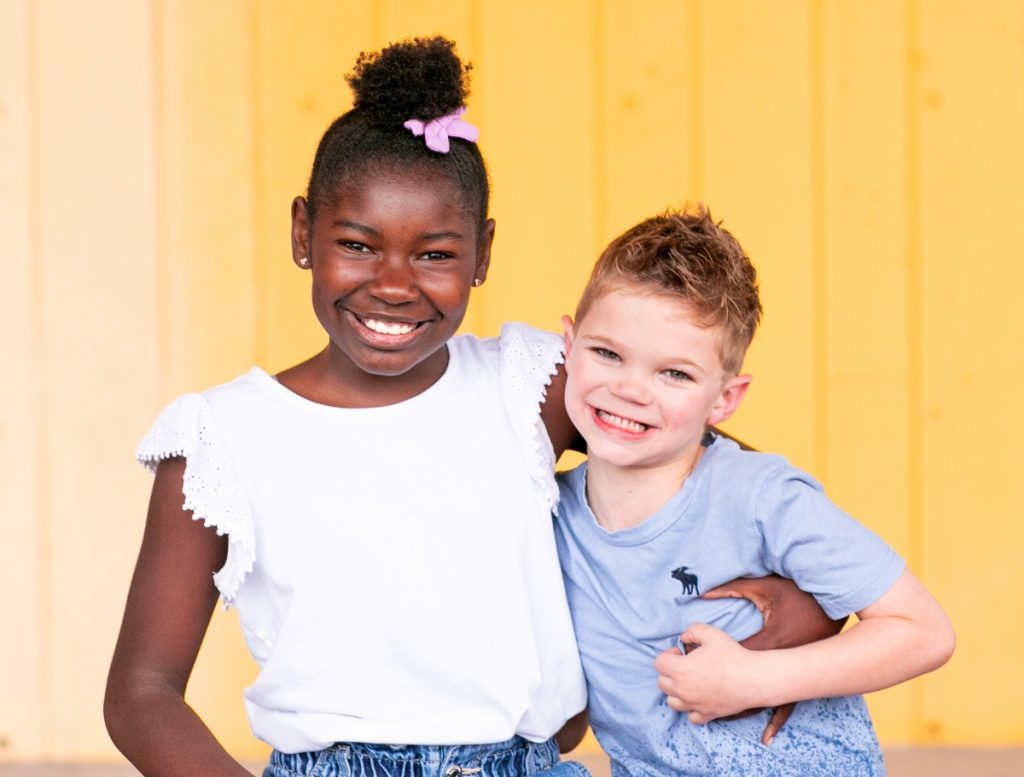 We always ask families we interview if they have any advice for others who are considering this process. Jake and Jacqueline had a few insights to pass along. First, they recommend that all families take the time to really evaluate what is best for their family – even if that isn’t adopting through foster care. The Clines completely understand where families who opt for private adoption are coming from: “Only you and your family know what your limitations are. At first we didn’t want to foster. We wanted a baby. That’s why private adoption was the best route for us. Then, after getting that experience, we wanted to adopt again, but we were not as interested in only babies. So the second time around, fostering with the intention of adopting was the better choice for us.”

Second, Jake and Jacqueline encourage families who might be interested in adopting through foster care to seriously consider fostering. There is something beautiful about being the bridge between children and their biological families. It strengthens that family – and stronger families lead to stronger communities. Plus, the relationship doesn’t have to end when the child goes home; the Clines still keep in touch with some of the families whose children they fostered. “We took care of their child when they needed it and we can continue to be support for them, just in a different way.” The relationships the Clines made while fostering have made their own family bigger and more beautiful. “Don’t be afraid to step out of your box,” they say, knowing the joys and heartaches of fostering. “You just never know what you might find.”