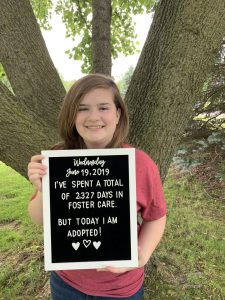 As a fifth-grade teacher, Melissa Lafever was familiar with many students in her school. However, there was one student in particular, named Gina, who Melissa always kept a close eye on. Gina was a third grader whose mother had passed away that summer – and as a result, she was placed in the foster care system. Although Melissa didn’t know Gina well, the child often crossed Melissa’s mind. Two years later, when Gina was in fifth grade, she handed Melissa a note that read, “I don’t know where I’m going, but I’ll miss you.” The thought of Gina moving to a new family and new school was more than Melissa could bear.

That night at home, it was clear to Melissa’s husband Shawn that something was weighing on her mind. Melissa shared Gina’s story with him. Without missing a beat, Shawn said, “Let’s start the process!” Melissa was shocked but overjoyed at the thought of becoming Gina’s foster and possibly adoptive mom. After finishing the training and becoming licensed, Melissa and Shawn were excited to deliver the news to Gina. As it turns out, Gina was just as delighted!

Gina, Melissa, and Shawn quickly grew close, and their new routine had them feeling like family. Part of their routine included visiting with Gina’s biological brother Dean, who was in a separate foster home. Although Melissa and Shawn were happy that Dean had a foster family, they couldn’t help but feel as though Dean should be living with them. As you can imagine, the Lafevers were thrilled when they received a phone call asking if Dean could come live with them.

Dean moved in with the Lafevers just in time for Gina’s adoption day celebration in 2019. One short year later, the family finalized Dean’s adoption – in the first-ever virtual adoption in Lake County, Indiana. Family, friends, case managers, and CASAs joined the family and the judge on Zoom for Dean’s big day.

Although the Lafevers enjoyed being foster parents, they are especially enjoying their life as an “ordinary” family, without court hearings and case manager visits on their schedules. Still, they credit all of the people on the children’s team for providing the family with so much support along the way. They told us to send special shout-outs to their case manager, Atinuke; their visitation specialist, Sencia; and their CASA, Alyssa! 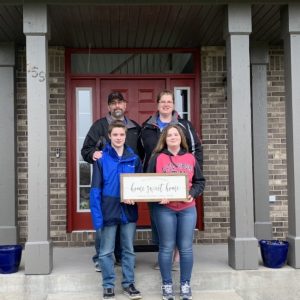 We asked Melissa and Shawn if they had any advice for families considering adopting through the foster care system. They had two words: “Do it!” Yes, the process can feel daunting at times, and the children will have “challenges and lots of paperwork and meetings…but it’s SO worth it!”

Melissa emphasized the importance of providing a home to older children, such as the ones in Indiana Adoption Program: “The children will grow up so fast and you will wish you had them from birth, but no matter the age, give them a chance.  Whether you start with one child or a sibling group, remember that they just want somewhere to call home. They want someone to trust and to be honest with them.”