“I had the scariest first visit ever,” Linnea remembers about the first time she met her adoptive parents, Blythe and Tom. “They brought 6 kids and I thought, ‘No way. This family is crazy. I don’t like kids.’” Now a mother of two, Linnea works with youth who have experienced many of the same issues that brought her into foster care. “My birth mom was never my safe home,” she explains, “but I also had two siblings that I didn’t want to leave.”

Linnea was 14 years old when she first visited Blythe and Tom’s home. She remembers not wanting to be adopted because she did not want to lose her siblings. “I tried to stay with my family but with them,” she points to Blythe and Tom, “I was finally able to have a childhood. They didn’t lie to me. They never gave up on me. They even supported me through my pregnancy.” Linnea was 17 when she was finally adopted. “There’s not a line waiting to adopt a 17 year old who doesn’t want to be adopted,” laughs Blythe. 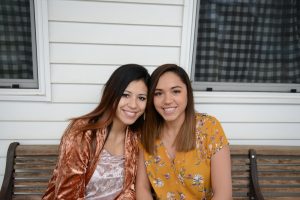 Though she was hesitant about being adopted, Linnea says Mauda was the real reason she decided to stay. Mauda came to live with Blythe and Tom when she was just 5 years old, along with her three siblings Anita, Rosa, and Oscar. The siblings’ photo had been featured in the Picture Book and online. With their older biological children out of the home, Blythe and Tom wanted to continue parenting and they thrived with a full house, so they inquired upon the siblings and were glad that Linnea connected with the siblings.

Blythe and Tom are grateful to have had a good working relationship with the children’s DCS caseworker, Susan. “Susan knew we didn’t quit,” says Blythe. As Blythe and Tom’s children grew up and began careers, Blythe and Tom continued to foster, and they were open to adoption when possible. Cheyenne and Tesla came to live with them, and then Andrew, too. Blythe and Tom were Andrew’s 5th pre-adoptive placement. Though his time in care was difficult, Andrew wants children who are in foster care to, “Keep trying, and complain when something is wrong.”

Together in the same room, the whole family is very talkative, and the topic of adoption comes up naturally because it plays a role in all of their lives. When it is appropriate, the family encourages open adoptions. “I think it’s a good idea because kids are going to have questions,” says Anita, who is a nurse, “I think it shows more love. Our bio mom had 8 kids and I know she loved us.” Anita says adoption helped her to have a big heart. “If I’m working with a doctor’s child or a child in the system, I don’t care. I have compassion.” 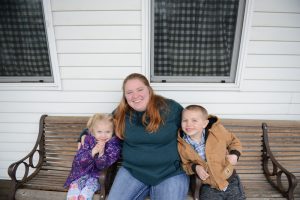 ​Cheyenne and Tesla also had an open adoption, but Cheyenne thinks that, “Parents need parenting classes to make sure they’re ready to parent. My birth mom did everything she was supposed to do to get her kids back, but she was not safe. My little sisters called me ‘Mom.’ They didn’t know. I took care of them.” She says open adoption may bring conflicting feelings. “At first, I was really mad at her, but it’s still okay to love her. If it wasn’t for her, I wouldn’t be with them [her adoptive parents] and I wouldn’t have what I have.”

Cheyenne also emphasizes how important it is for children in foster care to be placed with their siblings. “I’d be miserable without Tesla,” she says. Tesla nods, “It’s hard when you’re in the system, but never give up hope. Adoption is a whole other level because you actually have a family now.” Cheyenne agrees, “I have a huge family and I love my huge family. I wouldn’t be where I am today without them. Adoption is amazing. I want to do it someday.”

With Blythe and Tom, Mauda says, “I felt like I found a family who actually wanted me and took care of me and treated me like I was family.”

Tom says it’s important to consider adopting older youth. “We were able to make a difference and give them something to look forward to. We are able to see these kids grow and become stellar people in the community.”

“We don’t stop being a family when they turn a certain age,” Blythe reiterates, “Our family got bigger and better.”

Tom’s advice for prospective parents is to be educated, to take classes, and to learn about attachment. “Find out all the information you can,” he says, “Knowledge is power. If you know, you can be prepared.” “But don’t be scared away,” reminds Linnea, “Adoption is a chance at a new life. It’s a second chance.”