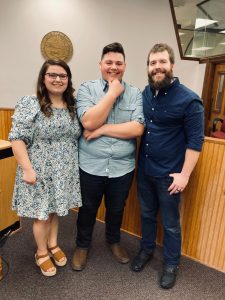 Maricela and Cody Moore say they always knew they should adopt from foster care, despite the fact that they were only in their 20s. Maricela was adopted at the age of 7 – by an adoptive family of 16! – so she knew personally the impact that an adoptive family can have on a child. In 2018, the Moores began fostering, and agreed between themselves that when the time was right, if it became an option, they would consider adopting a child from foster care. What neither of them expected, though, was how fast “it” would become an option.

After becoming licensed foster parents, the Moores had several placements and began to feel like they were “ready for anything.” Initially, and partially because of their relatively young age, Maricela and Cody had planned to accept children under the age of 6. But, then they got a call about a teenage boy named Izaak who was in need of not just a foster home, but a pre-adoptive foster home. At first, they thought “No way.” This didn’t fit into their plan. But after a lengthy conversation with Izaak’s case manager, Maricela found out that this teenage boy had a lot of similar interests as Cody: they both loved being outdoors, and listed hunting and fishing as their favorite activities.  Based on some common hobbies, the Moores took a leap of faith and accepted Izaak as a foster placement.

Maricela and Cody were willing to give fostering a teen a chance, but deep down, they still had their reservations. And then they met Izaak – and before you think, “this is going to be one of those stories where they met him and immediately just knew, right?”…think again. Maricela explains, “I was expecting a skinny blond teen to come in camo. When Izaak got out of the car, I was shocked about how big he was. He was over 6 feet tall and big – this was not the kid I imagined!” Uncertainty and doubts crept in: How can we discipline a teen who’s not much younger than us? Will he respect us or even be able to bond with us? 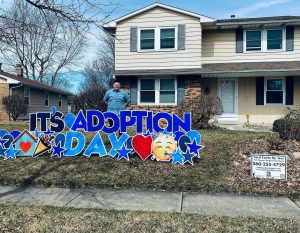 These are valid concerns – and quite common for parents who consider fostering and adopting older children. Unlike with younger children, many families seem to be afraid of teens, because they’re unsure of how to connect with them or are convinced that parenting teens is a task beyond their skill set. But Maricela and Cody counter that with a simple (somewhat obvious) statement: “We found out that you can reason with a teen. Trying to reason with a toddler is impossible.” (It may feel like reasoning with a teen is impossible, they joke, but once you’ve tried it with a toddler, well, you know the difference!)

Beyond being able to reason with a teen, Cody and Maricela cite a number of other perks of fostering a teen rather than toddlers. No navigating the anxieties of scarce daycare options. No diaper bags to keep track of, to pack and unpack every day – no diapers at all! (That one was a real plus!) Sure, they had to keep track of Izaak and be aware of what he was doing, but it didn’t feel like the rapid pace monitoring that they had to do with toddlers who got into everything and could move pretty fast for having such short legs!

And, Cody noted that the small gap in their ages was actually helpful for bonding with Izaak. They grew up with technology and social media at their fingertips, just like Izaak. They don’t have the “back in my day” mentality because, well, “their day” wasn’t all that long ago! They share the same collective memories of popular culture and world events. Izaak fit right into the family, he went to the local high school, and even started driving recently. Hindsight being what it is, Maricela and Cody agree that they would have started fostering teens much sooner if they’d known all the positives.

After waiting the requisite six months, the Moores filed to adopt Izaak, and in March 2021, at 17 years old, he happily and officially became part of the Moore family. “It’s been a journey,” Maricela laughs. “We’ve had ups and downs. But pretty early on, we knew he was supposed to be our son.” Izaak offers simple words of encouragement to the many teens who are still waiting to find a forever family. “Don’t give up hope.” And to families who are considering fostering or adopting teens, Izaak says he would ask of them to“just be open to anything, any age.” Maricela echoes: “There are a ton of other great teens out there who are just waiting for a family. Until you get to know the child, it’s just information on a piece of paper.” 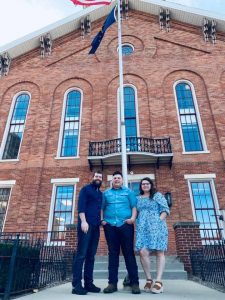 The paper they’re referring to is the Child Summary, which is a documenting of the child’s removal, their past experiences, current strengths and challenges, and diagnoses. The Child Summary can be overwhelming, to say the least, because it includes so much detail about a child’s difficult early history.  What the Moores want other foster and adoptive families to know, though, is that lots of things can look different on paper, and a child might have a certain behavior with one person and not another. That’s why it’s important to meet kids in person. “Become adoption recommended and definitely attend Meet & Greets.”

Maricela and Cody have some other advice too: “It’s not always going to be easy. You’re going to hit bumps in the road, but you’ve just got to love them through the craziness.” Although it can sometimes be hard to get to the point where you feel a connection with your teenager, keep looking for the interests and hobbies that you share. Spend time together – even something as simple as watching a television show together can give you a chance to bond. But most of all, Maricela and Cody say, “You just have to be open to a little bit of uncertainty. Take a leap of faith, take that chance…and you never know: you could end up with an awesome teen!”