The following article borrows content and interview material from WNDU’s “Wednesday’s Child” segments, which air weekly on South Bend’s WNDU. Interviews with Alex were conducted and reported on by Tricia Sloma. Alex’s first segment aired on March 11, 2020 with a follow-up “Wednesday’s Child” segment airing on April 21, 2021. The interview below with Alex and his dad Andrew aired February 17, 2022. These materials are reprinted with permission and gratitude.

If you read our recent blog post about “What Happens At 18?” then you already know that aging out of foster care can offer a harsh reality. Instead of feeling excited to begin your life with the support of your parents to fall back on, teens in foster care are faced with questions like: Where will I live? Who do I call if I need help? 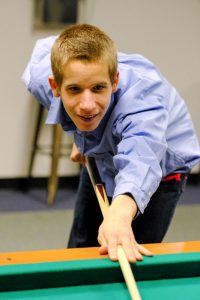 Last April, Alex was coming up on the dreaded “18 mark.” You may remember that we featured him in a blog post then, when he shared, “Hopefully, I get adopted this year, because this year is my last. I’m at the 18 mark.” Although he had lots of big dreams for his adulthood, he was very aware that there was a chance he might not find a forever family. Like many teens in his situation, Alex was anxious and unsure of what life would be like on his own.  That’s why he was excited to be featured on a second WNDU’s Wednesday’s Child segment. That segment aired in April 2020 and hundreds of people watched Alex tell the world what he hoped for in a family. By chance, one of those people happen to be Andrew Sporner.

Andrew is a 50-year-old single man who thought becoming a parent was not in the cards for him. But as a computer software engineer, Andrew saw so much of himself in Alex that he wanted to help. Andrew says, “I looked at myself [and said] ‘Somebody’s got to do something!’ You know?” However, the thought of adopting still seemed too far-fetched for Andrew. “I thought the whole idea was pretty much preposterous, you know. My age. Single, you know. What business do I have doing this?” For such a strategic thinker, adopting a teen felt too far out of the ordinary – something only young married couples do. Not to mention, Andrew was living out of state at the time. From Andrew’s point of view, there seemed to be a million reasons not to pursue adoption. Even still, something about Alex stuck with Andrew, so he decided to make a call to Indiana Adoption Program.

After making the call, Andrew found out that he was more than qualified to adopt in Indiana. Although single men and women often think that they might not make the best adoptive family for someone in foster care, the opposite is true. Many youth in foster care even prefer having a single parent of the same sex (or event two same-sex parents). “I started asking. [I] bounced the idea off of friends and everyone without exception was like, ‘do it.’” So Andrew began the adoption process, and he even moved back to Indiana to make the process easier.

From the moment that Andrew and Alex met, they had a bond. It’s just worked out,” said Andrew. “He’s a smart kid. There are certain little things he’s got to work on. You know, being focused, attention to detail. But when I was that age, I was the same way.” With Andrew by his side to champion him, Alex has flourished. Seven months after meeting Alex and just three days before Alex’s 18th birthday, their adoption day finally arrived. With the help of Grant Kirsh and Marshall County Circuit Court Judge Curtis Palmer, Andrew and Alex celebrated their adoption day. Andrew surprised Alex with cake, and Alex was thrilled to make it official. “After 13 years, it’s good,” said Alex. “After 13 years, I’m done. Out of the system!”