Remember being 20-something and being certain you knew what steps to take to make sure your life turned out just as you’d planned? Going to college, or getting the dream job, or finding the perfect person to raise the perfect kids in a perfect house. Well, as we all know, life often gets in the way of those plans and changes our entire trajectory. Which is exactly what happened to Sarah when she met 8-year-old Liam.

When Sarah was a little girl, she dreamed of fostering and adopting. But, she also thought she’d be married before building a family, whether biological or through adoption…which is why adopting wasn’t really on her radar when she starting working with Liam at Access Behavior Analysis. 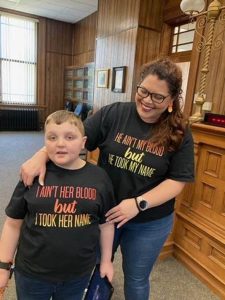 Sarah worked with Liam and other children with special needs on their speech, language, and social skills. Like many autistic kids in foster care, Liam was struggling because he never received the proper care, or didn’t receive it consistently. Since he was nonverbal, it was hard for Liam to communicate with the people around him; as you can imagine, this left Liam feeling frustrated, and the way that his frustration was communicated was through aggression.  His behaviors were becoming hard to manage, and his foster parents at the time were unsure if they could provide the care he needed.

After 8 months of working with Sarah, things began to change for Liam. He started using a text board where he could pull off photos of items he wanted to talk about. For Liam, this was the communication tool he’d been longing for. Liam was finally able to tell people what he wanted! He could express feelings of hunger, tiredness, and even happiness.

Throughout Liam’s progression, he and Sarah formed a special bond. Sarah knew that with consistent care, Liam could thrive – but she also knew that as a foster child, there were a lot of unknowns related to Liam’s future. Sarah started having conversations with Liam’s foster parents about whether they were open to adopting him. Although they were fostering him, it became clear that they were not going to pursue adoption – which broke Sarah’s heart. She was very fond of Liam and knew that he deserved a loving, permanent home. But not just any home – it would have to be one where the family understood autism and Liam’s specific needs. It dawned on Sarah that she might be the perfect person to adopt Liam…and just like that, the trajectory of Sarah’s future shifted.

With this new goal in mind, Sarah started researching what it would take to become a foster and adoptive parent in Indiana. As it turns out, the process was not all that complicated. Sarah was quickly licensed through Choices Coordinated Care, a Licensed Child Placing Agency that Sarah can’t say enough positive things about. “They were there at the drop of a hat, whenever I needed them.” After getting licensed, Sarah needed time to make her house “Liam-proof,” but Liam still needed somewhere stable to live. Enter Sarah’s boss: while she made adjustments to her home to accommodate Liam, Sarah’s boss became Liam’s foster placement. What a circle of support! Liam’s team of providers worked to make sure that Liam and Sarah had plenty of opportunities to bond and time to spend together. It wasn’t long before Liam got used to his new forever family and was able to move in with Sarah. She officially became his foster parent in July 2020, and just over a year later, in September 2021, Sarah was able to drop “foster” from her title – now she’s just Liam’s mom!

Since being adopted, Liam has been soaring past his progress expectations. Although Liam was never expected to be able to talk, now he’s working on three-word sentences! He’s even singing and quoting lines from some of his favorite movies (we were serenaded while talking with Sarah for this article!). It’s clear to anyone who knows Liam that he is happy to be home with a family who truly understands him.

Although Liam is flourishing in his new environment, Sarah admits that adopting a child with special needs has not been easy, and may not be ideal for every family. Families who are willing to take in kids with special needs must have a strong support network that cares about the whole family. Also, always being open to learning is critical – because there will be things you just don’t know about a child’s needs until you encounter them! Sarah credits their amazing support system with helping their family be successful. She says that Liam “struck gold” with his team: everyone from his judge to his case manager played a major role in his success. Even the volunteers, like CASAs, get a shout-out from Sarah: “Liam’s CASA, Linda, was with him from day one, so she was very knowledgeable about him. She still sends him cards and asks about him.” 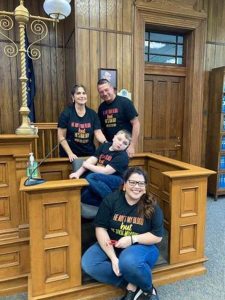 It’s not just Liam’s hard-working team that Sarah is thankful for, though. Her real superheroes are her close family members. “If I didn’t have the support of my parents, I don’t think I would have been as successful as I was,” she explains. Sarah says that her parents see Liam as their own grandson, and they’re always willing to lend a hand. When Sarah needs advice, her brother and sister-in-law are her “voices of reason.” Sarah says, “I’m more emotional, so I’ll always jump in without processing. My siblings talked through everything with me, so I felt like I was making the right decision. It’s good to have people who support you without asking questions, but it’s also good to have the people who ask you the hard questions.”

Sarah’s not done with the acknowledgments, though – she was also sure to mention the importance of her great co-workers and supportive friends (don’t forget her boss who took in Liam for a bit!). Sarah’s piece of advice: You can never have too many people supporting you on your foster and adoption journey – the bigger and stronger your community is, the better everyone will be. And ideally, your support network includes some other foster and adoptive families who really understand what your family is going through. Sarah wants to remind families that “it’s okay to be scared,” because fostering and adopting are big decisions, and sometimes scary! But, if you’re able to persevere past the anxieties, you’ll be changing the trajectory of not just your life, but the life of a waiting child like Liam.