A Change of Heart That Changed A Life 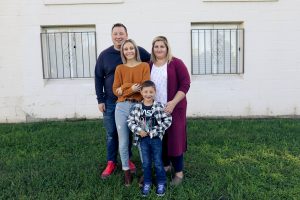 In 2015, Megan and her husband Jeremy were thrilled to bring home their first biological son, Gio. As new parents, Megan and Jeremy had lots of love to give and Gio was (of course) the center of their world. But as Gio got a bit older, Megan and Jeremy thought that it would be nice for their son to have a younger sibling. After trying for several years, the Scaparro family decided it was time to begin thinking of alternative ways to add to their family. At the time, Megan was working for a local elementary school, so she knew about foster care, and that Indiana needed foster and adoptive parents. After bringing the idea to Jeremy, the couple decided to do their research and really think about whether or not fostering was right for them – after all, it wasn’t a decision that they wanted to make lightly.

Nine months later, the couple decided it was time to take action. On Father’s Day of 2019, Megan and Jeremy decided to begin the licensing process. Their goal was to start out fostering, with the intention of adopting when their son was a bit older. The couple set some very firm boundaries:

The Scaparros, like many prospective families, were worried that bringing older youth into their home could somehow put their son at risk. And, they weren’t certain that they wanted to disrupt the birth order, so they thought it would be ideal if Gio could continue being the oldest child. But as many experienced foster and adoptive parents will tell you, predicting who is a good match for your family is nearly impossible. And age is not always the best way to gauge if a child and a potential family are good fits for each other.   There are so many older youth in foster care who simply want to be loved and know that they belong. And that’s exactly what Jeremy and Megan learned as they did their research on Indiana’s waiting children. As they looked through the profiles of teens who needed a forever family, their hearts changed, and they became open to the idea of sharing their home with a child older than 10. Little did they know, this decision would soon change the life of an Indiana teenager in foster care. 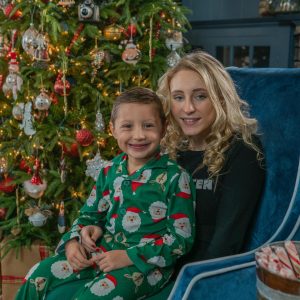 Shortly thereafter, Megan shared with a colleague and fellow foster mom the family’s plan to accept teenagers. About a week after that conversation, Megan’s coworker learned about a teenager named Maylee who desperately needed a pre-adoptive home. A little anxious and a lot excited, the Scaparros worked with Maylee’s team to schedule an initial meeting. Maylee remembers being nervous when meeting Megan and Jeremy, because she was sure most people didn’t like teenagers. “Adults consider us to be troublemakers,” Maylee explains, and she worried about getting her hopes up, only to be disappointed if the Scaparros just assumed she was “one of those teens.” But short outings turned into overnight stays, and then holiday visits, and Maylee got more comfortable with the family. Just one month later, Maylee’s judge ordered an immediate placement with the Scaparros.  Jeremy, Megan, and Gio were Maylee’s foster family for 10 months. Looking back, Maylee says, “I just kind of fell in love with them and wanted them to be my family.”

Although Maylee and the Scaparros quickly formed an attachment, there were still hurdles that prevented them from moving forward at a brisk pace. Shortly after Maylee moved into the Scaparro home, the world went into COVID-19 quarantine, which (among other things) significantly limited their access to resources. Ordinarily, DCS foster care case managers visit the children on their caseload at least once a month in person. But in-person wasn’t an option now, and virtual meetings just didn’t have the same feel. Court hearings were delayed, and therapy services – already in short supply – were either cancelled or shifted online (which again, didn’t always feel the most natural).  The suddenness of all of these changes, combined with the global uncertainty everyone was experiencing, took a toll. Maylee, still nervous about fitting in and being accepted by the Scaparro family, held fast to her defense mechanisms; she describes it as “putting up a wall” to keep from being hurt.

But the family’s therapist and Maylee’s CASA doubled-down, got creative, and worked even harder to help Maylee bond with her new foster family during difficult times. The pandemic was, no doubt, a curveball in Maylee’s ability to adjust to being part of the Scaparro household. But, the family focused hard on just taking each day as it came, and adjusting accordingly. They talked things out and resolved issues immediately. The pandemic isn’t necessarily something to be grateful for, but the Scaparro family admits that it at least forced them to get to know each other in a whole new way. 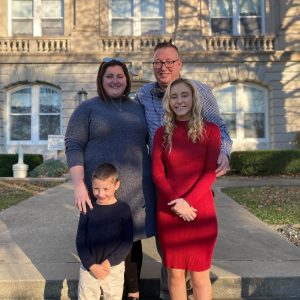 With each new day, they collectively took a deep breath, put one foot in front of the other, and adjusted their well-laid plans. While focusing on taking each thing as it came, days slowly passed, papers were filed, forms were filled out, and it was – believe it or not – November 2020. National Adoption Month. And more importantly, Maylee’s Adoption Day. To say the family was excited doesn’t even begin to describe their emotions that day. Maylee explains, “My adoption day was a release for me. While I was in foster care I was just nervous because I didn’t want to mess up and have them kick me out. I still sometimes feel that way, but now I know that they’re not going to kick me out. The adoption made me realize that this is finally real and they’re my parents. It made me feel like I was wanted.”

It always felt real to Megan and Jeremy. But for family to feel real to Maylee is a fantastic cause for celebration, even if the celebration was a little simpler in the time of COVID. Saying goodbye to quarantine and to foster care has brought the Maylee, Gio, and their parents such extraordinary joy, and they feel closer as a family as a result. Jeremy shakes his head, thinking about what life might be like if he and Megan had stuck to their hard and fast rules from their early days of the foster care journey. “Don’t close the door. Don’t be close-minded,” Jeremy advises. “You never know what might be put in your path.” Megan has a piece of realistic advice for families too: Teens are people too. Suddenly being part of a family can be a huge adjustment for them. So “don’t hold them to overly high expectations, and allow them to make mistakes” as they navigate their new normal with a stable, permanent family. It doesn’t mean they’re damaged or unlovable. It means they’re human. Hang in there, take deep breaths, focus on love, and keep putting one foot in front of the other on your journey. Simply put, “It’s worth it.”